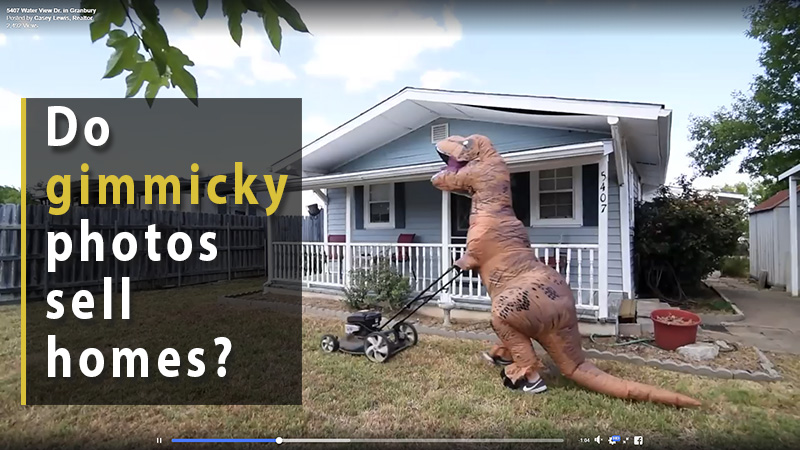 Do you think those videos and photos where agents get dressed up, or do something else that’s gimmicky, actually help to sell homes?

Here are a few examples so you can see what I mean:

A real estate agent in Texas has dressed up in a T Rex costume for his photos and video, and is currently using that to sell an $89,900 home:

According to this article at Forbes, “Dinosaur listing video turns into marketing success story“, the home went under contract in 2 days. A great result!

But Casey is not the first agent to try this. Another agent in Charlotte did exactly the same thing last year:

“Feedback has been unbelievable. A number of people have commented about how great and creative the video is. It’s certainly been much stronger than any other video I’ve made.

But most importantly I’m receiving calls from people wanting to tour the home of this dinosaur video they saw on Facebook. That’s a new one for me!”

Going back a couple of years another real estate agent, Jessica Arnett from Texas, dressed up as a panda in her photos:

Meanwhile, real estate agent Clint Smith in Queensland, Australia, has used his smooth dance moves in a marketing video for one of his properties:

However, Smith’s video doesn’t really show much of the home – just a still of a couple of different scenes in the living room and bedroom.

Another agent, Dylan Mahaney in New Brunswick, Canada, also did a dance video but he incorporated it as part of a home tour:

Mahaney said he has not yet received any offers for the Upper Coverdale, N.B., house — which is on the market for a cool $319,900 — though he hopes the video will get the attention of prospective house hunters.

“Ultimately, my goal is to sell the house,” he said. “As silly as it is, my client will never be able to say that I didn’t try.”

Mahaney has gone on to create other dance videos, and it looks like it’s become something of a signature thing for him:

And maybe it’s working, because Mahaney has picked up some media attention for his unique videos:

Back in Australia, and NGU Real Estate seem to be doing a lot of entertaining videos to promote their listings. If you look at their video views on their Facebook Page, their older videos, whilst still very professional, have very few views (around 1000). It wasn’t until they began to include lots of supercars and hot models, and started heavily advertising them on Facebook, that video views skyrocketed. Here’s an example, and this video has had about 238,000 views at the time of writing:

Do you think the extra attention helps the real estate get more listings, or do they help the homeowners get a better price or a quicker sale?

Ultimately that’s what these videos are trying to achieve, and it would be interesting to know what comes from this in the months after the photos and videos go viral online.

On the positive side, any video or photo like this has the potential to work for the agent, and in that regard it’s probably worth trying. As marketers we don’t get anywhere by sitting on the sofa, doing exactly the same thing as everyone else. When we stand out in our market then we might do something that works, so credit to these agents for thinking outside the box and giving it a go.

If an agent dresses up in some kind of costume, and it gets some media attention, does that help the agent long-term? Maybe it does, if the viewers respond favorably to the video or photos. If people like it then they’ll like the agent. But if it comes across as weird – in a bad way – then that’s going to backfire on that agent, and that’s not good.

Does an agent need to do something gimmicky to stand out in today’s social media world?

I think it depends on what they do. For example, the agency listed above that features a lot of supercars is doing professional videos for every home they sell, as well as all of their rentals. That’s a smart plan, and that approach, when there is a consistency to what they do, can help a real estate agency become known and that brings more sales. People like to list their home with a company or agent that is highly professional, and that creates marketing that is exceptional. I think NGU Real Estate, as one example, does that.

What about the agents that dress up as dinosaurs, or pandas, or who dances in a clip?

These can seem more gimmicky, unless they are part of a broader package that is consistent in its messaging. If an agent creates great work, and consistently incorporates, say, a panda costume in much of their brand then maybe that’s an appropriate step. Although they would want to be sure that such gimmicks do not take away from the ultimate goal of marketing the property. Some of the videos above didn’t get the balance right, and the video was only about the agent in the costume, but others did get the balance in terms of showcasing the home with a bit of a comical twist.

If a real estate agent decides that a costume or a dance is not their thing, but they still want to go viral in their market, then they can definitely do that. In my view an agent can become super popular in their local market by simply using high-quality photos, professional videos, and targeted Facebook content that is appreciated by buyers and sellers in their area.

Give buyers what they want – top class visual marketing that clearly shows the home and what it offers – and that agent will grow their business. No gimmicks required.