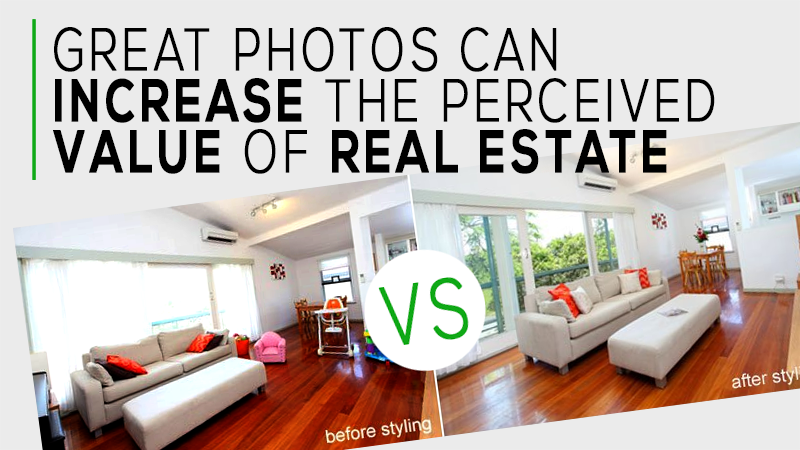 Do the photos used in your real estate marketing campaign really help? Well, insurance company AXA has revealed how great photos combined with great presentation can impact upon the perceived value of a home by up to 21 percent.

What they did is they took before and after photos of a one-bedroom flat in the UK, and they showed it to 1000 people who are currently tenants. To one half of the sample they showed the photo of the property in its ‘before’ state, which meant showing photos of rooms with personal items on display, closed curtains and blinds which made the inside look a little dark, poorly chosen camera angles, and they had towels hanging untidily in the bathroom. The ‘before’ photos of the outside had clothes hanging on a line, and garden tools on the lawn. The ‘after’ photos were presented to the other half of the sample, and those images were presented as a home on the market should be presented, with all clutter removed, and professional images used that presented the flat as a light, bright space.

This is not the same photo that was used in this research, but the principle is the same.

They asked the tenants:

“Based on your experience, how much per calendar month would you expect to pay for this property on the rental market?”

Here’s what they found:

What else did the participants in the survey say about the photos?

How many people said the apartment was ‘excellent’?

How many people said the apartment was ‘poor’ or ‘fair’?

Here are some of the negative comments made by those who saw the bad photos:

“In urgent need or recarpeting and decoration. The place is very shabby looking and would put me off viewing.”

“The pictures make it look very untidy and unprofessional, like the landlord is disinterested.”

So these aren’t just about the quality of the photos, but they actually speak to whether or not the tenant would even visit the property and consider renting it, and it shows that the use of bad photos even reflects poorly on the landlord!

Here are some of the comments by the tenants that viewed the good photos, which were photos of the exact same property:

“Looks very clean and comfortable and the garden is very tidy and well looked after. Ready to move in straight away.”

“It’s well presented – clean and tidy and shows off what you can do with the space you have.”

These are the comments a real estate agent or landlord wants to hear – the apartment is seen in a positive way, and it looks like it has been well looked after, which is appealing for buyers and tenants.

This is why you should hire a professional real estate photographer:

Hiring that professional photographer for $200, or even $500, when it means an increase in the perceived sale price of a home of $51,000 doesn’t sound so bad, does it?

And this is what a lot of owners and agents miss when looking at the price of hiring a pro photographer. They see the cost now, but they don’t see the difference it can make to the monthly rent, or the sale, of a property later on.

High-quality real estate photography works in combination with excellent presentation because it makes a property seem like it should be worth more. This attracts more buyers and more renters because they want the best value they can afford, and a well-presented marketing campaign presents a home in a way that makes it look like it should be priced higher than it is.